Am I a cat trapped into an human body?

Me, Myself and my Cats

Nothing special here: I grew up with a cat, or two, on my side. But the intimate approach with such feline strongly influenced my mindset at the point I sometime believe I’m myself a cat. It is not just an intimate feeling with cats, it is that I recognize myself in their behavior.

During my life several cats, more than twelve, lived with me and my family, but only a few of them did get a special place into my life. That’s why I want to publicly state about their role and importance for me.

As a computer geek, back in the time when I was using an email client to manage all my incoming emails (and it was KMail, for the record), I changed the reply and forward quotes to appear like the following:

just to emphasize how I was committed to cats! Today I read pretty much all my email via the web, and I never find out another client to allow me to customize the reply and forward quotes so far, so my email replies are more boring.

For the records, here is a chronological list of my personal starred cats, so far. This does not mean that all the other cats do mean less to me, it is just the cats listed here are those I recognize myself the most with.

I always had one cat at a time, unless for some strange reasons we got two!

We were searching for a new cat to adopt, and it happened that two little sisters were together in the cattery, so my dad decided to bring both of them home.

Can you imagine my feelings? It was like having a huge chocolate ice-cream, except you got it doubled!

Unluckily, both of them were sick and the younger died on a sunny sunday, while me and my father were at an archery competition; my mom take care of her. So, the two cats setup did not last very long, and we were again with a single cat in the house.

The remaining cat was named Micia (kitty), we were running out of names! Then Rossini happened: my trainer found a full red small cat, my father felt in love with him and so he decided to bring him home.

That was the beginning of the double or nothing cat setup: since then we always had “cats in pairs”. It became natural.

Why are not neither Rossini nor Micia listed in the hall of fame? Unluckily both of them died young due car accidents, and while they had been very important, I did not spend much time with them.

Duchessa was my very first cat, the one that grown up with me since I was a little two-years old human being.

I clearly remember her appearing each time I was crying, gently pulling my hair with her claws to make me stop and laugh.

I don’t have memories of another way of approaching me: it happened my father used to walk around the kitchen bringing me on his shoulders. Being my father 190 cm height, I was pretty much close to the ceiling of the kitchen. Duchessa then used to jump over the kitchen hangings and try to pull my hair with her paws.

Last, I clearly remember she hiding her puppies into my bedroom, even when she was hiding them from me!

Duchessa was a real predator, eating any sort of tasty animal she was able to catch (especially rats and birds).

Credits for the above photo are to the best photographer I ever met, publicly known as my father, who has won several competitions with such photo. You have to understand it was back when the digital photography was just a dream, and being able to shoot at great distance a moving animal was a real challenge.

Duchessa died due to an accident when I was a middle-school student.

When I went public on the net with my first blog, I placed her photo on the top of the site to emphasize my feelings for Duchessa.

Miguel, also known as Puccio, was a male black and white cat that lived with us along with his sister. I don’t know exactly why, but Puccio trusted myself the most, and I clearly remember he miewling each time he saw me.

Unluckily, Puccio disappear in the spring of the 2002, when I was approaching my master degree thesis. Threfore, I decided to name my source code tree as BlackCat in his honor (even if was not fully black!), university forced me to namely switch to RoleX because my tutors did not like the idea of having an animal as project name (no matter they were stoling a famous clock brand name). Anyway, the source tree and build system kept the original BlackCat name and I also elaborate a web site image as main logo of the documentation and, of course, of the GUI. 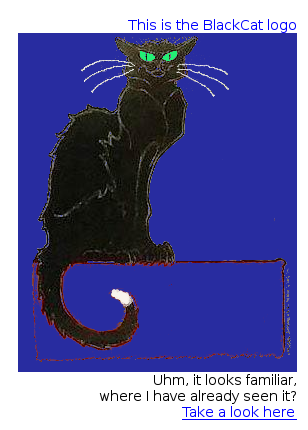 Carmensita, also known as Puccia, was the natural sister of Puccio, a long-fur black-and-white cat.

She totally replaced Puccio after he disappear, becoming my mate during the cold afternoons I spent studying and working for my PhD. While I was at my desk, no matter if reading a book or working on computer, she was used to ump on the top of the desk and place her head on my left arm, keeping such position for a long time sleep. Of course, I was not moving my left arm too much in order to not disturb her!

I also remember myself just spelling her name loudly, and she appearing from wherever she was in a couple of minutes or even less, most like a devote dog than a cat.

I often refer to Puccia as a generational cat since she entered my family when I was finishing the high school and died after my marriage, covering therefore a long period over which my life changed (I got the driving licence, I graduated, got a PhD, a job, and a wife).

My tribute to her was similar to the one I did for Puccio: when I left university and worked on my own for another research project, I named the whole project (and not just the source tree) WhiteCat, producing also a logo of her sleeping on our terrace edge. 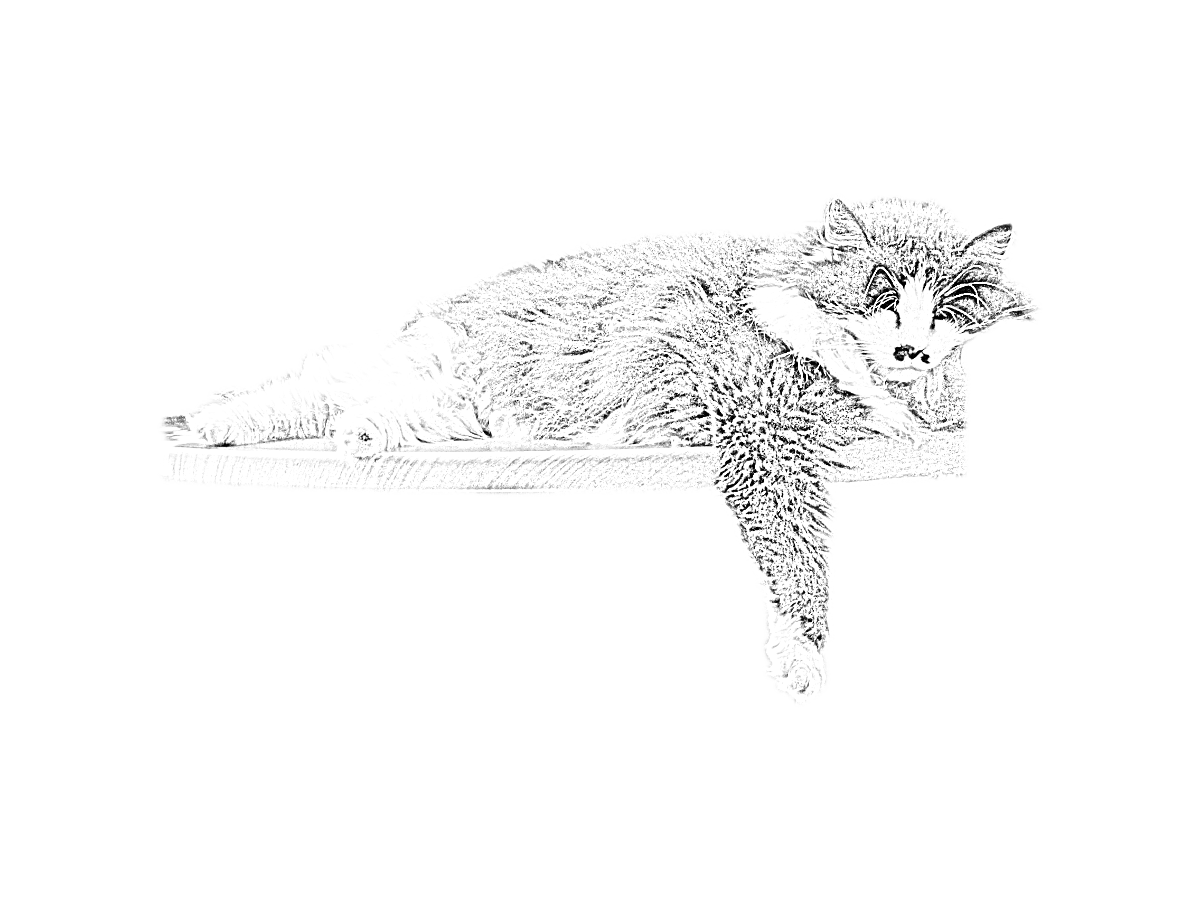 Here you can see Carmensita doing one of her favourite activities: 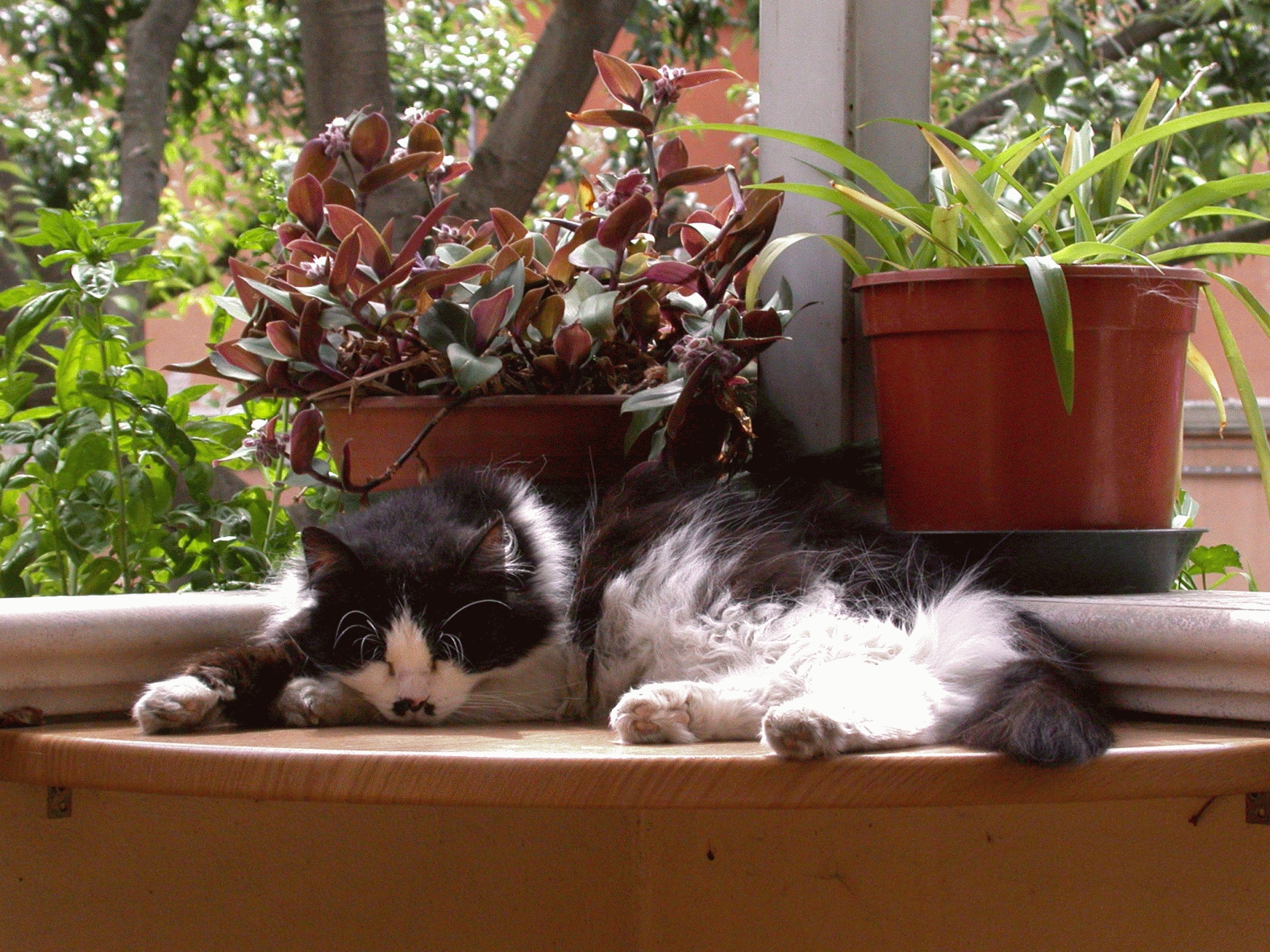 However, having been so much important cats, my whole family began to credits them in different ways.

My father was used to sign his emails with PP, formerly Pover Puccia (Poor Puccia), an exclamation I was used to say while looking at her sleeping in total piece on the couch.

Me and my mom designed and delivered a cat’s crib: we found old figures and placed them in their outside dedicated terrace, so that you could walk around our garden seing cats sleeping near the figures.

It takes more than five years to make my brain accepting the idea of interacting with other cats. I suspect it was due to my previous commitment to a generational cat (Puccia), and so I had some subconcious resistance in accepting new cats.

Anyway, with the Duchessa experience in mind, me and my wife agreed in the need for our son to experience true contact with a cat.

Sofia is the first true black cat in my life so far. Sofia is also my son’s very first cat.

Maybe because this situation reminds me Duchessa, maybe because Sofia appears to me as very elegant with her velvet black fur, or maybe because there’s just a strong tie between us, she is a very important cat in my life.

And the positive credits for the above are that I began using Sofia as my profile image for pretty much everything from my web site to my other accounts (mail, phone, GitHub, etc.). 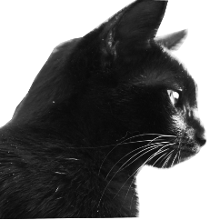 Olivia is not a starred cat of mine, rather I believe is the most important cat in my wife’s life experience.

Olivia gained home access nine months later than Sofia, and therefore she is the very second cat to my son. After an initial debate, Sofia and Olivia found an agreement on house sharing and today they appear much more as *true sisters rather than roomates.

Olivia has some very interesting behavior, and threrefore I could not avoid taking her into account in my day-to-day activity. But even if really deserving photos, being a very beautiful cat, my brain does have place for a-one cat at time (Sofia), therefore I gave credits to Olivia naming my main computer system after her.

You can see Olivia in one of her curious behvaiors here: 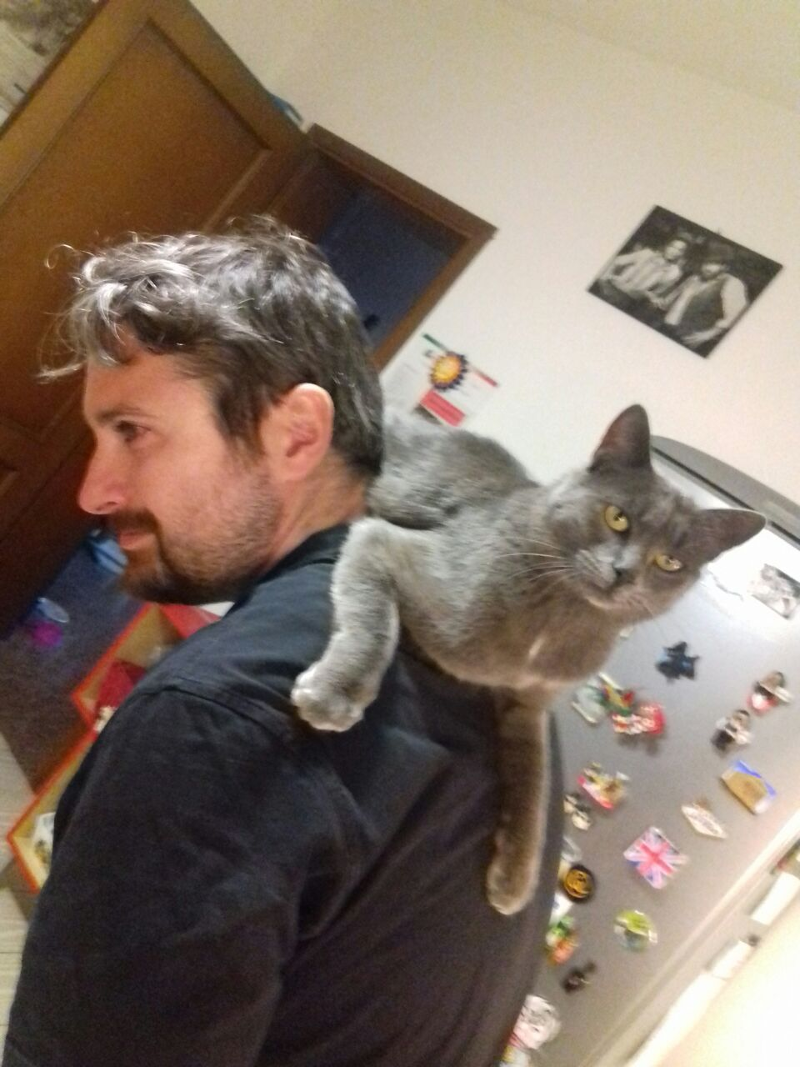 Yes, I had also a few dogs in my life, see the dogs page for more details.